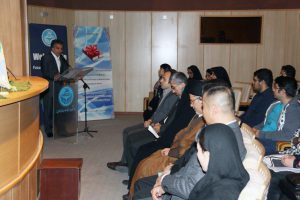 Mr. Dashti, student of American Studies, began the ceremony in English by greeting and welcoming the attendees. Then, Mr. Golmohammadi, Member of the Department of Japanese Studies, greeted Mr. Kobayashi and other attendees in Japanese and appreciated the dedication of 100 books to the library of Faculty of World Studies. 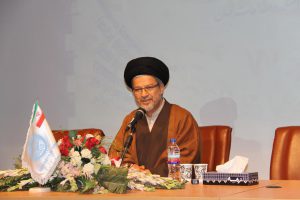 Dr. Ameli briefly introduced the Faculty of World Studies. “We are preparing to celebrate the 90th anniversary of Iran and Japan relations. The two countries began their official cooperation in August 1929. Although, I do not believe that the two countries began their relations from that date because they had strong business relations even before that. Furthermore, Iranian and Japanese citizens used to visit the two countries as tourists before 1929. However, I believe that 90 years is a long time, even though Iran was forced by the Allies to break off this relationship with Japan for 10 years after World War II,” he continued.

Dean of the Faculty of World Studies added, “Iran and Japan are somehow the same in many ways, three of them are worth mentioning more than others. Maybe the first similarity between the two countries is their bitter experience during World War I and II and the socioeconomic issues after the Wars. Japan suffered more than 2 million military and hundreds of thousands of civilian casualties. After the War, the soldiers sought jobs, adding to the issues of a country who was already suffering from huge post-war problems. Although the nature of Japanese involvement in the World Wars and invasion against Iran by Iraq are different, both countries have experienced post-war issues, such as inflation, sanction, and unemployment.”

Stressing Japan’s struggles with famine and other issues after the War, Dr. Ameli continued, “the Islamic Republic of Iran has been in a continuous conflict with the global ruling system since the beginning. The United States and its allies began imposing sanctions and limitations against Iran a few days after the Revolution. These limitations have been developed through various allegations and have been in place even after JCPOA. This policy is against the people. It is the low-income community who suffers most from this undemocratic policy.”

“The second connection between Iran and Japan is in the policy of preserving national culture,” Dean of the Faculty of World Studies continued, “Japan’s doors have always been open to the world. However, they have always been careful about their national culture. This translates into cultural independence from political and economic issues. The world is exposed to the fake representation of Iran by the American media. They believe that Iran seeks isolation from the world, while we seek cultural independence and preservation of national culture. I believe that culture is a natural right and must be respected.”

Dr. Ameli added, “Iran and Japan’s third similarity is their eagerness for development. I believe that Japan could establish a stable country after World War II. The country is a brand. I do not mean brands like Sony or Panasonic; I mean the country itself is a brand due to its discipline and quality. When we buy a product “Made in Japan”, we are certain of its quality. This is because of paying attention to development and education. Iranians, likewise, have always sought science and knowledge. It is clear in their eagerness for development.”

Dean of the Faculty of World Studies concluded his speech by asserting the ever-increasing relations between Iran and Japan. 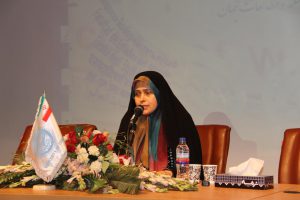 Dr. Nahid Pour Rostami, Educational and Research Deputy of the Faculty of World Studies, was the next speaker at the ceremony. Briefly introducing Japanese Studies major, she said, “I hope that today opens a new chapter in the academic relations with Japanese Embassy.” 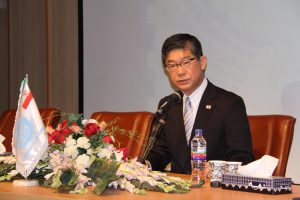 Mr. Hiroyasu Kobayashi, Japanese Ambassador to Iran, was the last speaker at the ceremony. Paying his gratitude for holding the ceremony, he said, “I hope that these books will be used by the researchers and students who want to develop Japanese Studies in Iran.”

“In addition to other media, books are good references for information about Japan. They enable us to study different subjects,” Japanese Ambassador continued. He also discussed the history of Iran and Japan relations.

At the end of the ceremony, all the attendees walked to the library of the Faculty of World Studies to unveil the 100 books dedicated by the Japanese Embassy. 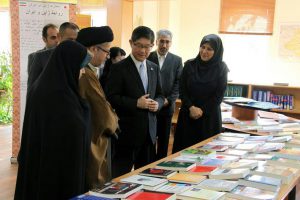 Before the unveiling ceremony, Dr. Fariba Afkari, Director of the Library of the Faculty of World Studies, greeted the Ambassador and appreciated the book dedication by the Embassy.

Dean of FWS’s book launched at the anniversary of Supreme Leader’s 2nd letter...