You are here: Home1 / News2 / Introduction to “Cyberspace Philosophy” Book 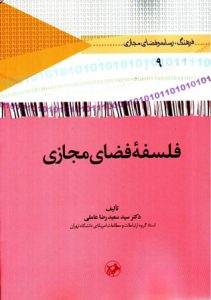 “Cyberspace Philosophy” is Dr. Saeid Reza Ameli’s newest book on cyberspace. It is published by Amirkabir Publication in 254 pages and 500 copies. The book is the ninth installment in the series on culture, media, and cyberspace.

“Cyberspace is naturally different from the physical sphere and has presented an active, global, and influential capacity into this sphere. Cyberspace is of a numerical, interactive, hyperlink, decentralized nature while it is attached to a space which is all-present and flexible regarding exceptional changes.” Adopting this approach, the book “seeks to provide a philosophical, ontological picture of information technology and the philosophy of artificial intelligence, computers, and data. The book introduces the natural characteristics of cyberspace and provides a different pattern of understanding about the subject on the basis of dual speciation paradigm.”

The third chapter is dedicated to “ontology of cyberspace and analyzing its elements and aspects. The chapter begins with an introduction to cyberspace ontology and then studies the natural characteristics and concepts of cyberspace. One of the most important discussions of the book is provided in this chapter; the ontological analysis of the three concepts of cyberism, cybernation, virtualization. On the other hand, the natural characteristics of cyberspace are studied on the two levels of macro and micro through the ontological approach.

The final chapter of the book is dedicated to the author’s theory of cyberspace; dual speciation paradigm. The author has introduced this theory as a value-oriented, native approach. The fifth chapter analyzes the dual concepts of objective-subjective, presentation-representation, and real-virtual to further explain the philosophical roots of his theory. In fact, dual concepts of objective-subjective, presentation-representation, and real-virtual are studied in line with the philosophical, etymological analysis of cyberspace through the approach of dual speciation paradigm.

The final chapter of the book explains the conceptual relationship between the book’s discussions and seeks to introduce dual speciation paradigm as the epistemological basis of cyberspace system. The author believes that “cyberspace philosophy seeks to identify the logic of cyberspace and find a mathematical, analytical solution to understand the concept. As it holds a computer nature and is formed in a numerical environment, it could be argued that the philosophy of cyberspace is rooted in analytical philosophy.”

Dissertation Defense Session for “Model and Structure of Decision-Making in...

Introduction to “Muslim Family and Cyberspace” Book
Scroll to top